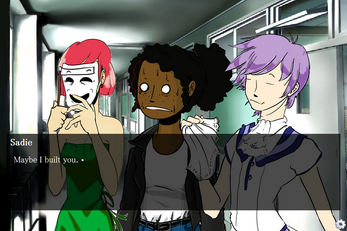 Corin and Von are the latest in the line of the endlessly reincarnated lovers, Galaxia and Prince Xer. Traditionally, the two incarnates will meet, fall in love, and ultimately defeat the similarly reincarnated Lord Velt. Such is their destiny.

Corin and Von are less than interested in each other though. They’re best friends of course, but romance is a complete non-interest. Fate as a way of sticking them together at very possible turn in hopes of forcing their love to form.

Unfortunately for Corin and Von, they are approaching the time in their incarnate lives where Galaxia and Xer first confess their love so the pull of destiny is especially strong. This also happens to be the night of their school’s Homecoming dance.

It’s up to you as Corin to make it through Homecoming without bending to will of destiny. Hey, maybe they could actually go with the people they actually like. 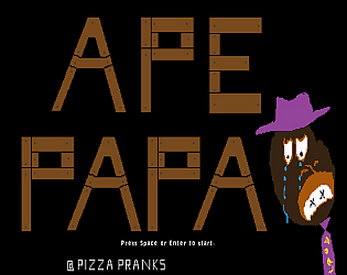 You are Ape Papa! Rescue your baby from the bad carpenter twins faster than the other Ape Papa.

If both papas fail to rescue baby in time, the one who gets the closest will be the consolation winner.

Magical Warriors is a game in progress that was originally created for the magical girl game jam. The game had players working together to get the most of their summer vacation while protecting their town from any invading monsters. The core concept is consistent but the game has two distinct versions.

The original version made for the jam is a purely cooperative game where the players competed against a deck of random enemies and a timer. Social encounters were handled using a large assortment of decks. The game itself at a large element of randomness and limited player interaction. It was overall too similar to the board game Arkham Horror. And it was not so great version of it.  This version was prototyped, submitted to Boston FIG, and promptly rejected.

And you can play that version here.

The second (and current) version is currently being remade as a micro-RPG. The game now features a separate game master that helps guide players through game scenarios. Now instead of being  mostly a board game with roleplaying elements, the game is much more of a RPG-board game hybrid. The game reuses many elements of the original game but cuts out most of decks of cards, transferring their functionality to the game master.

This second version aims to condense the feeling of a roleplaying game into a single session. This will mostly be accomplished using basic RPG elements and mechanics and confining them within the space of a board. Currently it is an early prototyping stage and not available to download.

Away in a Tower

Made for MAGS for the theme “Spring Cleaning”.  The idea I had was that the player would start an adventure game in the middle with a bunch of useless inventory items or at least have no context for them. The only thing I really remember about making it is trying to make a stealth section. In retrospect that was actually one my first adventures into “actual programming”.

Made for the MAGS theme of I think “Sidekick”. A game about kids competitively solving mysteries. One day I hope to make a competitive adventure game where two actual people play against each other.

Made for the theme I can only assume was “Liars”. Looking back it turns out this was the very first MAGS entry I ever submitted. There isn’t much to play here as you just pick some simple choices a couple times until the game ends. I’m pretty sure I spent the majority of the time making this game, making a system that could randomly generate the new article at the beginning and making sure the character properly acknowledged it.

I made this for one of my first (if not very first) Ludum Dare. The theme was minimalism, simplicity or something terrible like that. For the longest time I had no idea until some Giant Bomb live stream I had on in the background said something to the effect of “I want to see space”. Armed with the simple goal and Space Oddity, I began to make this game.

I guess the minimalism idea was that it was like an adventure or crafting game except you have all the stuff you’ll need and you just use one button to build. At some point it morphed into a mediation on doing creative work and my own insecurities. At least that’s what I assume/realized it was after the fact. I didn’t really plan it that way when I started. I just sort of started writing to fill space in the game and create context for the player. I’m fairly certain it’s my only complete story focused LD and my highest rated one too.

I think the theme for this month was Groundhog Day? I think I spent this month just trying to make a standard adventure game. If not, that’s definitely what it seems like I did. I don’t have much to say about this one.